The Gübelin Gemstone Rating assesses the quality, rarity and salience of a specific gemstone and translates these attributes into a simple number: the Gübelin Points. It gives meaningful orientation for privates and for professionals who wish to get a comprehensive ranking for their gemstones, in particular as the trade and the consumers become more digital and cannot physically see and touch them.

So far, there is no common language to describe the key characteristics to communicate beauty, quality or rarity in a consistent way. The Gübelin Points intend to provide comparability and direction by reducing the complexity inherent to coloured gemstones. 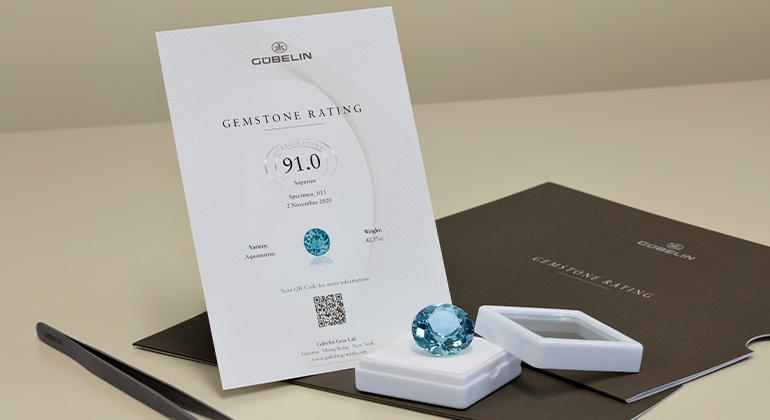 The Gübelin Gemstone Rating can be applied to the major types of high-value coloured gemstones. The rating procedure assesses different characteristics of the gemstone that contribute to its beauty, the rarity and the attractiveness.

The following types of gemstones are in scope:

Only natural (i.e. non-synthetic) and transparent gemstones that are either faceted or polished qualify for the rating system. Gemstones which have been subjected to common treatments (e.g. traditional heating, clarity enhancement) can also be rated.

Quality is the major part and covers the main visual characteristics of the gemstone, consisting of colour, clarity and transparency as well as cut and brilliance.

Rarity considers the relative availability of this type of gemstone in the market. It includes the gemstone variety, its size and the absence, presence and severity of treatment.

Salience addresses the extent of exceptionality and attractiveness of a gemstone beyond the objective characteristics of the quality category. It is best seen as the gemstone’s capability to stick out of the crowd.

The assessed characteristics yield an overall rating on a scale of 75 to 100 Gübelin Points.

The rating is conducted by trained and experienced experts following standardised procedures. However, it is in the nature of any such rating to contain an element of subjectivity and vagueness leading to a limited repeatability of the result. Also, certain parameters shift and drift over time, and demands to adjust rating parameters such as the rarity from time to time. This also affects the consistency of the rating result.

It is also important to understand that the rating system is not exhaustive, and does not include all parameters that influence the commercial value of a gemstone. Hence, the Gübelin Gemstone Rating is not suitable to directly deduce buying or selling prices. 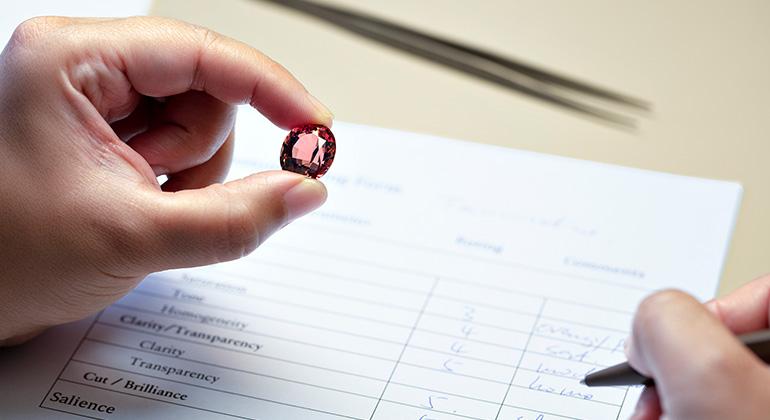 The standard fee for the Gemstone Rating service and issuance of a rating document is CHF 250.

If the Gemstone Rating is requested as a stand-alone service, i.e. in absence of a Gübelin Gemmological Report, the identity, treatment status and a possible phenomenon or trade colour are determined only by means of a microscopic analysis. This reduced and shortened level of analysis does not provide the level of certainty comparable to what is undertaken when testing a stone for a Gübelin Gemmological Report. Consequently, the identity, treatment status, phenomenon and/or trade colour of a specific gemstone might change when undergoing full testing, which in effect would also imply a different result in the Gemstone Rating.